Bushfires – The Myths and the Facts

Who can forget the scenes of bushfires devastating whole communities, millions of hectares of forests going up in smoke and millions of birds, animals and reptiles dead and injured during the summer of 2019/2020?  We live on a flammable planet. Sedimentary and isotopic records show that global biomass burning has occurred for over 350 million years and human societies have coexisted with fire since their emergence.  Though wildfires are a global phenomenon,  countries with large expanses of forested and vegetated areas such as Australia experience the most damaging wildfires and a bushfire somewhere on the continent is a yearly expectation.  Though Australians are used to and have some understanding of bushfires, several myths about bushfires exist.

Fact: The President of the Australian Academy of Science, Professor John Shine, remarked that “the scale of these bushfires is unprecedented anywhere in the world’. He went on to state that while Australia has had fires that have covered a larger area in the past (e.g. in 1974) these fires were grass fires and the fires of 2019/2020 were forest fires. Shine notes that “Unlike forest fires, these grassland fires are less intense and the ecosystems can more rapidly recover. Also, there are far lower economic impacts or loss of life because these fires occur in vast remote landscapes”

Furthermore, Australian Academy of Science Fellow Professor Chris Dickman has estimated “that Australia has lost at least a billion birds, mammals and reptiles this bushfire season. This figure does not include insects, bats, fish and frogs”

Reference: “The Australian bushfires—why they are unprecedented” – Australian Academy of Science, February 03, 2020, https://www.science.org.au/news-and-events/news-and-media-releases/australian-bushfires-why-they-are-unprecedented

Myth: Arsonists were responsible for the recent devastating bushfires. It is dishonest to blame climate change.

Fact: The CSIRO reports that “Climate change doesn’t cause fires directly but has caused an increase in the occurrence of extreme fire weather and the length of the fire season across large parts of Australia since the 1950s … The impact of climate change has led to longer, more intense fire seasons and an increase in the average number of elevated fire weather days, as measured by the Forest Fire Danger Index (FFDI). Last year saw the highest annual accumulated FFDI on record”.

Myth: Hazard reduction burns have been wound back in recent years due to the influence of the Greens and this resulted in the massive bushfires of the summer of 2019/2020

Fact: There has been more hazard reduction burns in NSW in recent times than in previous eras as seen in the graph below produced by Dr Amy Griffin, senior lecturer in geospatial sciences at RMIT University, using data collected by the NSW Depart of Planning. 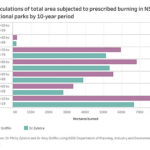 Furthermore, it’s worth pointing out that NSW Rural Fire Service (RFS) Commissioner Shane Fitzsimmons noted that hazard reduction burns “did nothing to combat the massive "mega-fires" burning in NSW” during the summer of 2019/2020

The Greens policy on hazard reduction burns is “support hazard reduction burning (before bushfire season) to reduce the impact of a bushfire when guided by the best scientific, ecological and emergency service expertise. Our policy on this is clear and hasn't changed recently. For more on the Australian Greens' policy on bushfire management, please refer to Aim 8 of our Environmental Principles”

Sutherland Greens acknowledges the Dharawal people, traditional custodians of the land, and pays respect to Elders past, present and emerging. We acknowledge their living culture and their unique role in the life of the region

Monthly Meetings
Where: Stapleton Community Centre Meeting Room Two,     3 Stapleton Ave, Sutherland NSW 2232
When:   The first Thursday in the month  at 7.00 pm
Currently, for 2021 due to CoVid restrictions meetings are held via Zoom conferencing. A link to the Zoom meeting is sent each month to all registered members. Non-members are welcome.  Please contact [email protected]  for access details.
Once lockdown restrictions are removed meetings in the Stapleton Centre  will recommence.